Your browser version is out of date and poses a signifigant security risk. Please update your browser to view this site.

“Excellent service, everything was on time and the efficient team have done a great job done.”

“Excellent workmanship, everything was left clean and tidy. The team went out of the way to do a good job.”

“The project was managed smoothly and brilliantly, we received excellent communication throughout.”

Outdoor leisure and sporting activities are a key part of any local community, not only do they promote exercise and fitness, they offer an opportunity for people to come together. Whether as a spectator or a participant, the appeal can be somewhat hampered by the elements making it a challenge to get the most out of all-weather pitches and the like.

Our Covered MUGA™ is a clever and contemporary solution. Expertly designed to ensure minimal posts and wide-spanning coverage, this is a cost-effective, long-lasting, and highly durable structure that really does ensure all-year-round use! If you are a sporting facility that has evening sessions, then we can add floodlights to allow play even in the heart of winter.

Size and specifications are entirely bespoke meaning we have the flexibility to work with varying heights and spans. Whether you are a sporting facility looking to cover tennis courts or a school or a college who want to offer your students the best sporting chance and generate some extra revenue by hiring out the facilities for community use, we definitely have a solution for you. If you prefer to make a splash, then we can cover your swimming pool too.

In recent years we are proud to have worked with The Football Association to design, manufacture and install spectator stands at their training facility and to have created an archery training building for Team GB. Please do get in touch to find out more!

Get a quick price

Send us your email and an idea of your requirements and we'll get back to you with a quick price.

Take a look through some of our featured sports canopy projects 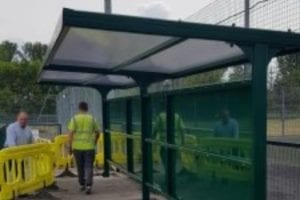 There are plenty of spectators that want to come along to games at Haughmond Football Club, but the weather doesn’t always allow it. In the rain, it’s a cold and miserable affair. In the summer, it’s far too hot to enjoy the game. The club wanted to add a shelter for their spectators so they’d be protected from the weather no matter what, so that’s what they did. The team talked to us to see what sports canopies we could offer. They chose to use a Motiva Linear to give the spectators the best viewing experience possible. The shelter now keeps the rain off, so they can stay dry no matter how hard the rain comes down. The roof is also able to block some UV rays, so it’s much more comfortable in the summer months, too. To read more about Haughmond Football Club’s spectator shelter, click here. 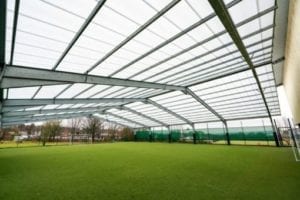 The Brier School work to give their students the best experiences possible, and that includes sporting opportunities. They hold cricket games, relay races, and more. They even encourage pupils to get out on bikes and trikes in their break times. They wanted to encourage sports more, but the British weather often stopped pupils from getting outside. To counteract this, the school started looking into our range of sports canopies. They found the Covered MUGA that we provide and had it installed. Now they have a fantastic all-weather space for sports. Pupils can get outside and play whenever they want, without worrying about the rain. They can also take part in more sports, as there’s no chance of games being rained off. Pupils love having the chance to get outside on their breaks now, whatever the weather. Overall, it’s drastically improved the lives of the students. To read more about The Brier School’s covered games area, click here. 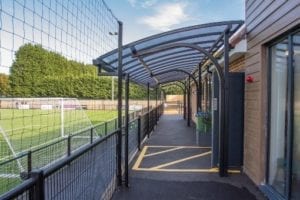 Football matches happen in all weathers, and that means that the fans come out in all types of weather too. It’s hard for them though, as much as they love their team, they don’t want to be sat out in the freezing rain all afternoon and Horsham Football Club was aware of this issue. They chose the Motiva Cantilever from our range of products to create a large shelter that spectators can stand under. Now, even if it’s raining, they can come out to cheer the team on and not get wet. It also creates a covered walkway for everyone who uses the building, so they can move around the building without going out into the rain. It’s proven to be a big hit at the club. See more about Horsham Football Club’s covered walkway here.

Haileybury College is an esteemed residential school, that aims to give their students the best learning experience. That includes education and support, but also sporting opportunities. They had the grounds for sporting events, but the weather often got events called off if it turned bad. They started looking into sports canopies for the area, so their students could take full advantage of the space they had. They came to us looking for a solution and decided on a Covered MUGA canopy for the area. Now, they can play sports whenever they want. The canopy protects the ground from rain, so no more getting wet when trying to enjoy a game of football or basketball. With additional features added by the school, such as table tennis tables and anti-static sports turf, it’s become the perfect place to play sports and enjoy the outdoors. Click here to see more about the Covered MUGA at Haileybury College.

Zaytouna Primary School wanted to be able to create more sporting space for their pupils, but they didn’t have indoor space for it. They had outdoor grounds that worked perfectly, but of course they had to think about the weather. If it rained, how were the pupils going to play sports? They got in touch with us to see what could be done. Looking at our sports canopies, they decided to use a Covered MUGA for their sports grounds. This was the best decision, as they now have a dedicated sports grounds that can be used all year round. They’ll no longer have to worry about games being rained off, and both players and spectators can stay dry. It’s created a lot more opportunity for the pupils of the school, as they can now get outside and play a game without worrying about the weather. To read more about the covered sports pitch at Zaytouna Primary School, click here.

Get a quick price

Send us your email and an idea of your requirements and we'll get back to you with a quick price.